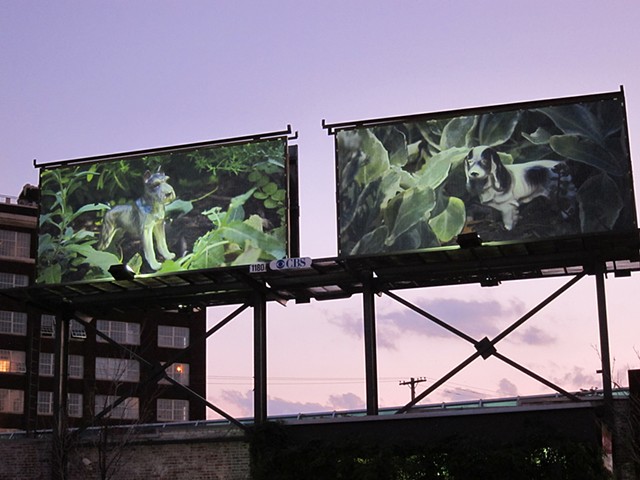 For my commissioned Missouri Bank Artboard project I created two images from my ongoing photographic series called BELIEVABLY TRUE. Each image consists of a photograph of a porcelain dog standing in a wilderness of forest-like plants. The dogs are from my childhood collection, and these photographs speak to both “the secret life of things” that Susan Stewart writes about in her book, On Longing, and to the “theatricality of all miniatures”. Stewart states that culture, not nature, produces miniatures. For humans, an object is simultaneously a static entity as well as a locus for projected animation, narrative and play. Humans and animals have a basic understanding of space and objects in space. Infants recognize objects very early and begin to reach for them, long before they can speak or walk. By the time infants are a year old, they know the difference between inanimate and animate objects, and employ those objects in play. Both animals and humans use play to develop skills, especially ones that help them survive and thrive.

The relationship between play and art, in my mind, is a significant one, and artists and non-artists employ play to explore what Brian Boyd in On The Origins of Stories describes as opportunity, risk and strategy. For both artists and non-artists the creation of and appreciation for fiction is a way to become deeply engaged in the invention of characters and events without requiring belief in those inventions. Recent studies have shown that our neurons are activated by stories we hear, and that we improve our capacity to understand the world around us through fictional offerings of situations and characters. Essentially the lack of factual reality can help us comprehend the world around us. The actions of fictional characters, invented narratives, and imagined landscapes prompt interpretation, cognition, assimilation of information and the development of memory.

The role of the object in play is indisputable. In Werner Herzog’s film, The Enigma of Kaspar Hauser, the main character is a boy, Kaspar Hauser, who was confined for the first seventeen years of his life to a tiny cellar with no contact with the outside world. His only companion was a toy horse that made it possible for him to play, and the film depicts the toy as a crucial element in Kaspar’s survival. Children play pretend with complete commitment even before understanding many other aspects of life, such as changes in their surroundings or what others may be thinking or feeling. This is universal behavior.

I photograph dogs from my collection and place them in pretend, wilderness environments to capture the feeling and scale of my artistic journey. I am interested in articulating the origins of my creativity in pretend play and in acknowledging my adult use of fictional narratives of content, character, location and time as crucial aspects of my artistic practice. As a child I’d shrink myself in my head and imaginatively transcend time and place, with my porcelain dogs at my side. I did this so I could answer questions I had about myself. And by remaining, for a time, within the controlled confines and safety of my invented world, I could also explore the real world within the controlled confines and safety of my invented one. In my adult artistic practice I create highly defined, narratives, and I still reckon with questions, many of which are still unanswerable. I continue to create invented worlds, characters, landscapes and personas in order to get at the truth of things.